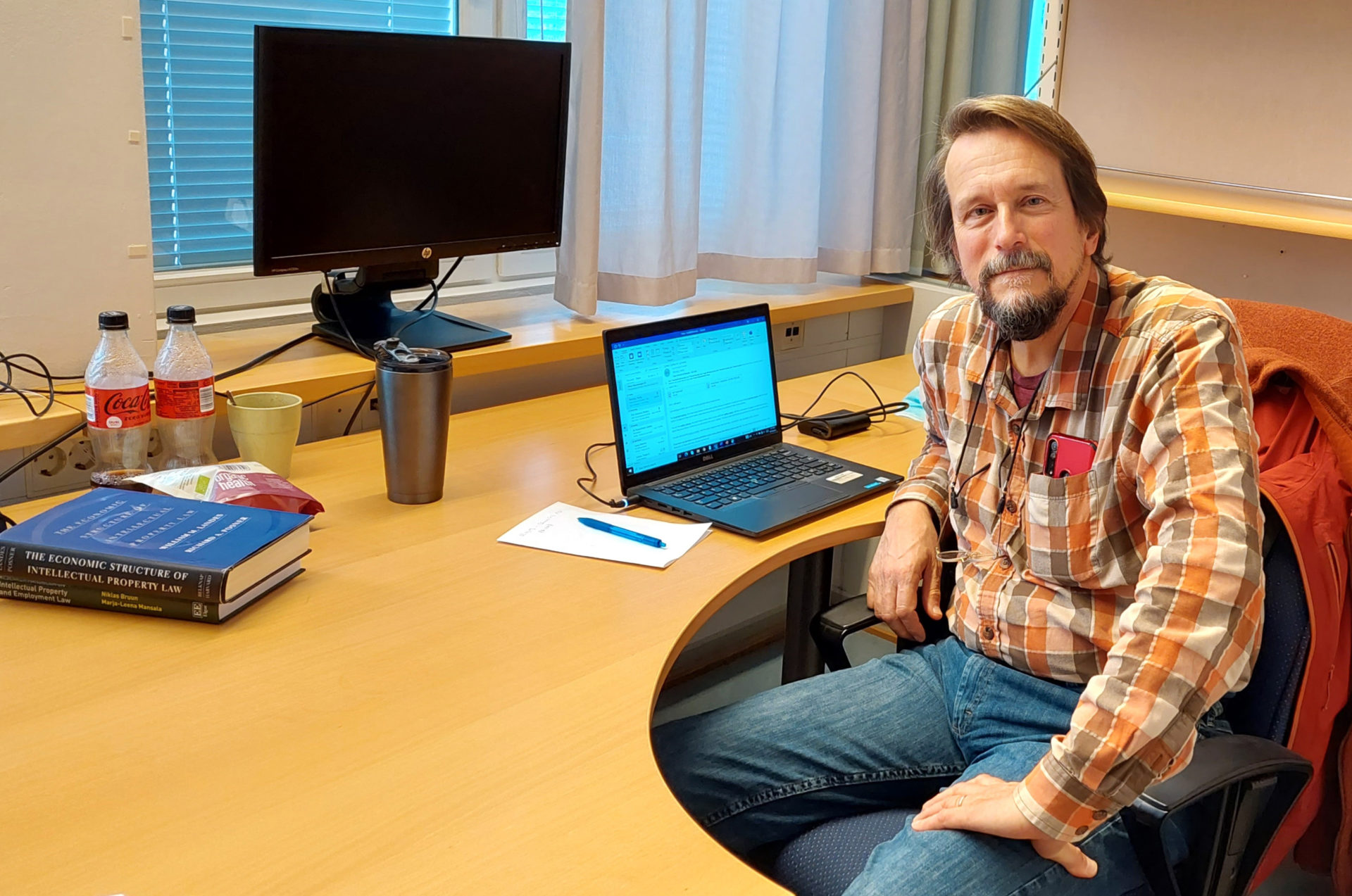 In Autumn 2021 Hanken welcomed a new Fulbright professor, Paul Heald, a cosmopolitan, researcher and novelist. Specialising in IPR issues from an economic point of view, he told IPRinfo about his ideas and methods, which are somewhat outside the mainstream.

Professor Paul Heald from the University of Illinois is back in Helsinki! In August 2018, in a presentation on Fairness and Authors Reversion Rights at the ATRIP conference at Hanken, Heald asked if the reversion of copyright from an original transferee (usually a publisher) back to the writer (of a book) really helps authors bring their works back into print. The answer, based on an empirical study, was yes. At present, he compares the availability and pricing of copyrighted publications to those in public domain. The effects can even be observed in a small book market, like Finland.

Heald has worked all over the world. In 2021, several factors pointed towards Helsinki: his research interest, the possibility of a Fulbright professorship at Hanken and even the COVID-19 pandemic, which had put the work of Heald’s wife to a halt, so that she could follow him to Finland. As Heald studies intellectual property issues from the economic point of view, he contacted his colleague professor Nari Lee, the current director of IPR University Center, whom he has known for years. With a big smile she confirms that they are ”pals”.

ꟷ Nari is my [Fulbright] host and she has made everything so easy for me! She generously gave me two assistants, one for Swedish, the other for Finnish literature, Heald says.

Heald is interested in the effects of law. Does new legislation work the way it was meant to or does it have some unexpected bad consequences ꟷ this can be found out by empirical studies.

ꟷ The basic idea is really simple: all law is designed to affect human behaviour, and whenever the law changes, you can follow the change in markets. The answers received by surveys are often not very reliable. Therefore, I like to do natural study, to observe the before and after. For example, how passing a new law changing the copyright status of a class of works affects the market.

One famous empirical IPR study by Heald and Susannah Chapman was published in 2012. Using statistical plant catalog information ranging over a hundred years, they examined the effect of patents on crop diversity. Contrary to claims against IP protection, they found no significant decrease in vegetable and apple diversity. They also found little evidence that patents incentivize innovation in those markets.

Similarly, Heald has studied the impact of copyright on the in-print status of novels and found that instead of having the positive effect on availability, it in fact diminishes access to books.

Professors against the ever-growing scope of copyright law

Heald’s economic research has shown that it is the public that pays the cost of longer copyright terms: the availability of works is diminished, their prices are higher and derivative works, like audiobooks, are fewer. Even though he criticizes the system, Heald denies being a copyright rebel.

ꟷ Let’s say I’m a copyright skeptic; it is a better word. In the US ꟷ and in the EU ꟷ most copyright professors are skeptical of the ever-growing scope of copyright law.

He says that the big copyright owners have a huge lobby, and the associations of the content industry are always pushing towards more protection. There is, however, no organised consumer group to lobby for the public domain.

ꟷ So, in the US, it was law professors who took on this, to fill the gap. We tend to be uniformly advocates for the public domain.

The role of competition law in IPR issues increasing

An American law school graduate can wish for a career in a corporation, a law firm, public administration, a court or in politics. Heald began his lawyer’s career path as a court clerk for the famous Judge Frank M. Johnson Jr. at the U.S. Court of Appeals for the 11th Circuit. In 1989, after his clerk year he, however, started to teach at the University of Georgia Law School. Why did he choose a career in academia?

ꟷ The choice was mostly practical. I was married and had two small children, and academic work offers more reasonable working hours for a family man. Besides, this seems to be genetic: my father was a professor and so is my daughter, he adds, laughing.

He also finds intellectual property law offering always new issues to research. As for the future of the IPR system(s), Heald only gives one prediction: significant interventions in markets by governments will be more in the area of competition law than IP law. He says that in this respect the EU is ahead of the USA; the European Commission has e.g. forced Google and Microsoft to pay huge fines for their abuse of dominant position.

ꟷ In the United States there is a continuing struggle over who can control and exploit intellectual property, whereas antitrust law has withered over the past 30 years. The scholarship is still sophisticated, but this has not leaked in the antitrust policy sphere or found its way into enthusiastic enforcement by the Justice Department.

ꟷ There is a call from academics and the world of journalism demanding a change in US competition law. Think of Facebook: just one person in control, and a huge percentage of Americans, sadly, get much of their news and information from Facebook!

When Heald started teaching in 1992 there was more diversity in national copyright and patent laws, but he says that the TRIPS Agreement has done an effective job in unifying IPR law all over the world – diversity now lies in enforcement, not in legislation.

ꟷ Also, copyright law is better in establishing rights than assuring the enforcement. For instance, shutting down a web site is a mechanical problem. And piracy is tied to poverty, and often those who buy illegal copies would not have the money to pay for originals anyway.

In general, Heald finds the international IP structure so stable that changes can only be done in margins. 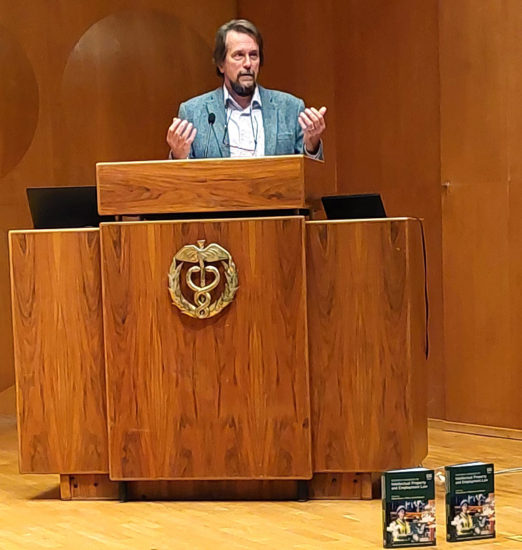 ꟷ The Berne convention is never going away, but there is some flexibility within it, like reverting copyright back to the authors. In the EU, the new Copyright Directive 2019/790 (Art 22) gives the possibility to revoke a transfer of the copyright: if a work is not published, the producer must give it back (”use it or lose it”). Also some other exceptions could be expanded, like the broad American fair use doctrine.

Nevertheless, not all IPR are globally harmonised yet, like those concerning employer inventions. In the seminar (22 October 2021) launching the book Research Handbook on Intellectual Property and Employment Law edited by Niklas Bruun and Marja-Leena Mansala, Heald reminded that in the USA, employers usually automatically take all rights to inventions created in the employment.

Novelist career will continue in pension

Before starting at the law school of the University of Illinois, Heald had studied comparative literature. Vast reading and a degree in literature make a solid foundation for writing fiction. Heald is, indeed, an established novelist, whose best known work, The Clarkeston Chronicles, comprises four novels so far. Clarkeston is a fictive Georgian town, not very unlike Athens, GA, where Heald lived for 22 years with his family. After retiring in a couple of years, Heald plans to return to the south.

ꟷ When leaves start to fall, we head back to Athens where we still have our house. So, I could do my writing in the mornings and do volunteer work in the afternoon. There is a lot of poverty there, homeless people, and other needs.

For summers, Heald has a vision of himself working in Michigan, where he has 120 acres (about forty-eight hectares) and is building a cabin.

ꟷ A Finnish-like thing to do, isn’t it?

It is the memory of his childhood years in Michigan that makes him feel at home in the Finnish countryside and small towns. The population of that state largely still descends from Finnish immigrants who arrived in the beginning of last century. One of them was the father of Heald’s grandmother.