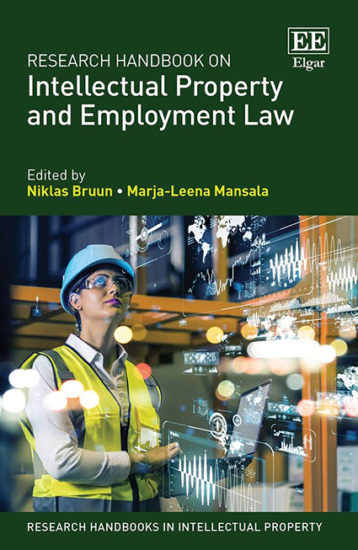 Regulation on employee inventions, but also employee creations and designs, which the book touches upon, is an interesting topic. While law on both intellectual property and employment has developed and changed, law on employee inventions seems, said slightly provocatively, to have remained more or less the same. The book explores this phenomenon but takes the reader also on an interesting journey to jurisdictions all over the world, that is to the US, Europe, Korea and Japan as well as China. It does also take a glance at new challenges.

In addition to the editors twelve authors have contributed to the book. Out of these fourteen, twelve are working within academia and two are practitioners.

The book is divided into three parts. The first comprises three articles arranged under the heading “Foundations of Employee Intellectual Property – Historical and Methodological Perspectives”. The contributors to this part are Niklas Bruun, Marja-Leena Mansala, Ulf Petrusson and Alan Hyde.

The second part concerns the “Regulatory Intellectual Property Framework”, which touches upon regulatory developments in different fields of IP, not only patents, but also copyright and design, as well as describes regulatory aspects in Europe, the United States, France, Korea and Japan, and China. The two editors can also be found here as well as Antoon Quaedvlieg, Sean M. O´Connor, Sylvie Nerisson, Stephanie Le Cam, Nari Lee, Trevor Cook and Liguo Zhang.

The third part is called “Globalization and New Challenges” and deals with topics, such as choice of law, who can exploit the intellectual property of academic employees, trade secrets and so-called non-competition clauses. Paul Torremans, Ann L. Monotti and William van Caenegem have contributed to this part.

The starting point of the book was a seminar in Helsinki some years ago, to which the editors had invited a distinguished group of academics to brainstorm on the somewhat intriguing situation of the status of employee IP. As indicated the law on IP had and has expanded and evolved due much to the rapid technological development and at the same time some of the foundations of labour law have been challenged. Nevertheless, law on employee IP seemed to have stayed unchanged. The participants taking part in the seminar asked themselves whether this was really the case or not, and in the former instance why?

The result is the book at hand. The various articles are well written and approaches the initial question on the status of employee IP from various perspectives. What is fascinating and eye opening is how culturally affected the various legal constructions are. This can be clearly seen in the illuminating article written by Nari Lee on the regulatory framework and practice in Korea and Japan. The idea of lifelong employment seems to tip the balance in favour of the employer, at least in Japan, while as expressed both in the excellently formulated introductory chapter “Foundations of labour and IP law” and some other articles the individualistic western approach is employee centred. This forms the starting point for the legal solutions.

When viewing employee IP generally it is, Bruun and Mansala note, based on two different legal constructs. The first assumes that there is always one or several human beings identifiable behind a work or an invention. The second is that when protected works are created or invented within an employment relationship the employer, a legal person, can be regarded as the initial holder of copyright and IP. As we have seen both, but particularly the latter, are very much embedded in the national legal culture. This makes an international harmonization most challenging.

According to Bruun and Mansala there seems to be a possibility, however, to find some common goals within different legal approaches to ownership, author- or inventorship if one seeks to find solutions, which are fair for the employee and at the same time assures that the employer can acquire the rights and use IP in an efficient way. In order to achieve this a functioning employee IP must not restrict the employee´s entitlement to recognition for the achievement, it must not restrict the employer´s possibility to collect the exclusive IP rights in one and the same commercial hand, the process of determining the employee compensation must be efficient, and there must be a confidence building conflict solving mechanism.

Under these conditions, I understand, an individualistic and a collectivist approach can live side by side.

On the other hand, it is important to notice that the knowledge-based business is changing our traditional perception of the role of the “dependent” employee to a role as employee-inventor, which could result in co-ownership rather than just appropriate remuneration for an invention. The role as a business enabler narrows the conceptual gap between the employee and the employer. The chapter written by Ulf Petrusson certainly contributes to new perspectives in this regard.